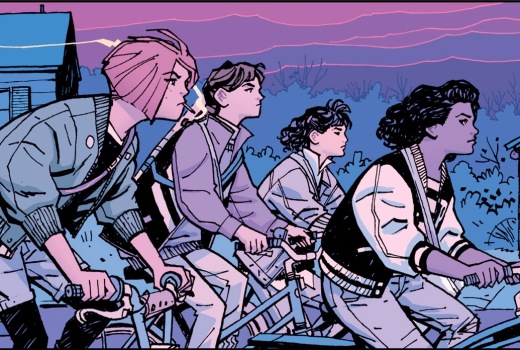 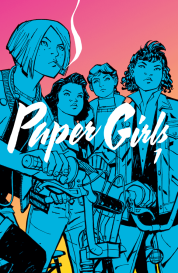 A bizarre tale of weirdness laced with strange from beginning to end. Also they definitely have way too many undelivered newspapers to be keeping their jobs after this.

Join me today while we take a look over Paper Girls: written by Brian K Vaughan, art by Cliff Chiang. Its going to be a bit of a weird ride so hang in there with me while dive right into it.

To be honest I’m not entirely sure what I just read. Was it enjoyable, I think. Was it rememberable, sort of. More then anything its a very strange drawn out tale that leaves you utterly confused. I’m not sure it was entirely by design. I just read a whole volume of the stuff and I’m not even sure what’s going on. Its like a bit of jumbled writing was created in hopes of creating a compelling story line but they forgot that you need to explain or show things to your reader so they can become invested in it. As things stand I could walk away from the story right now and not be too upset with not finding out what happens.

As 12 year old girls go they aren’t believable. They read more as seniors in high school if

anything. Especially who I guess they are trying to paint as the protector of the group. What 12 year old girl smokes cigarettes, is accused of being a loan shark rolling people, and decides having gun is the best course of action? So for characters they get docked on this one. The way the girls act, respond, and talk vastly differs from what they are trying to portray them as. But it does add to the extremely bizarre vibe of the whole series.

The art is nicely done, though the character’s faces do tend to lose definition sometimes to the point of being creepy. The simple colored backgrounds when focusing on characters though lends itself very well to the story telling. Some of the panel choices though seem off. Why would I want to either crane my neck side ways or hold my comic like some playboy magazine to be able to tell what’s going on? 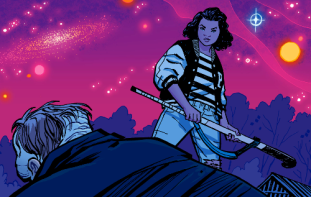 It has an all female lead assemble cast which is a cool thing to see. They are all young girls, which while cool to see in a comic, is questionable since they act more like adults in a sometimes vulgar way I wouldn’t want a little kid exposed to. The cast does include diverse races and ethnicity though so points there.

Probably a story you’ll have to read a few times just to really nail what the hell is actually happening in it. It feels like you are just kind of getting thrown into things without really building any connection to the characters or any understand of the universe. But I think the main cast is feeling a bit like that as well. Hopefully we will see a little more structure from the series as it progresses to make it more approachable to readers.

One thought on “A More Colorful Review – Paper Girls”