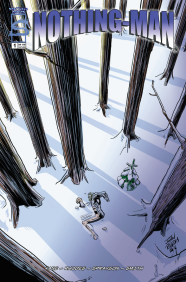 A fairly generic superhero comic with a glimmer promise still to come.

Hey guys, ScottyG here with another review. Today I’ll be looking at Nothing Man #1 by Scattered Comics. As you guys know I’m big on superhero comics and I frequently see superhero comics devolve into mimicry rather than originality and I’m hoping this one avoids that trope So, let’s jump on in.

The art’s solid. While the character designs are a little generic but there is a lot of detail in the panels. This comic is full color which is kind of cool to see on something like this. I don’t know if I’d call this the best art I’ve ever seen, but it does it’s job and effectively conveys the story visually. Later in the comic, we get introduced to some more interestingly designed characters and some of them have very unique designs but off the bat the initial characters we are introduced to are fairly generic. I did like some of the risks they took, particularly with the fire crossing panel boundaries to visually convey that they are linked and, simultaneously, that the fire is engulfing. There are some minor anatomical discrepancies on characters on pages but I’ve seen worse; you never get characters confused visually.

The lettering is decent but in a few places ends up squeezing the dialogue a few times either by placement or simply not making large enough boxes. This isn’t a major faux pas and is largely just something a critic who pours over dozens of comics would pick up.

The dialogue in this book is mostly expositional rather than exploratory; that is to say that it doesn’t really do much for the story, just restates what is being communicated to us visually. If you took it away, you could still understand what was going on. This is a good example of a strong visual narrative in a comic and, at the same time, shows a distinct lack of utilization for the literary aspects of the comic. Creators often forget that comics are a hybrid medium- that the literary and visual aspects need to be in tandem rather than simply supportive.

A side note: the narration bugs me. It comes off as rather pretentious and amounts to really kind of a superficial statement. It also starts off as retrospective narration and ends up kind of switching to scene relevant dialogue at times.

The story itself is pretty generic and cliche. It’s about a Fabio-haired dude who wakes up in the forest with no memory and super powers while being chased by the military. However, the setting shows signs of promise. The later parts of this issue establish a kind of fun paradigm between humans and superpowered individuals. Essentially that supervillians run have taken over and now run Paradise City after a clash between a legendary hero and them. It’s a fun kind of totalitarian set up where we are introduced to some, sure to be relevant later on, creatively designed villains.

Overall, it just barely escapes being that a super generic comic that I hate. On the one hand, it falls into a lot of traps that small publisher independent superhero comics often do (relying too much on the reader’s existing knowledge of superhero tropes, trying to do the big publisher thing with a large line up, etc) but on the other hand it actually tries a few new things. I don’t think this will be the number one, top selling, most engaging, industry-redefining, superhero comic run of the ages- but I think you could do a lot worse (actually… I’ve seen that many times so I KNOW it can be a lot worse).

Novelty: 5/10 [Reliant on cliches, except near the end]