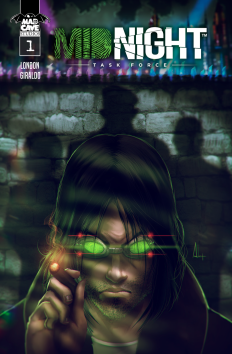 A clever cyberpunk/scifi detective comic you need to read.

So on today’s plate is “Midnight Task Force” by Mad Cave Studio. To be honest- they sent me 3 comics and just one look at the cover and art style of this and I knew I had to review it. Very high tech and weird. Anyway- let’s dive right in!

So first off- this comic is full color and does great things with it. It doesn’t half ass it- it is fully committed to that and uses it well. If I was judging this comic sheerly by the art on the first few pages it’d get full marks just for that. There are a few awkward panels, like on the top left of page 5 where it looks like someone went a bit crazy with the clone-stamp tool. However overall there are a few awkward poses but not enough to offset the glorious (and I don’t use that word sparingly) demonstration of the mastery of emotion and movement the artist shows. There is a straight up BRUTAL opening scene where a murder happens and I felt every punch VISUALLY. That’s saying something- a great use a angels and dynamic postures really makes it feel alive.

The lettering is on point and the onomatopoeia work well at invoking the sound they are attempting to make. They als do a very interesting with their panel edges. I’m sure it’s just a photoshop brush but I’ll be damned if it isn’t cool. It’s a stroked border like an ink brush and it fits nicely with the art style and crime/horror tone of the comic. There is some minor readability issues with some of the neon text and following some of the conversations gets a bit confusing for the readers at time. Still, I’ll give them credit- they tried something new and it didn’t come off as terrible, just as not gangbusters.

I feel like they were showing their influences a bit when they put Jet from Bebop (or someone who looks a lot like him) in one of the scenes as a bartender but it was a nice homage. Either way- that’s the tone we are getting. Very space cowboy/cyberpunk and not in the bad way. If there was an issue I had with it it’s the main character. He doesn’t quite fall into gary stue territory but he get’s close. Genius detective that solves crime the police can’t solve, dark and troubled past, wears a trenchcoat, etc. That being said- it’s a stunning mystery series. Most series with a suspense/mystery element give us a very basic “follow the clues” method that those playing at home with Dora the Explorer could just as easily do as the detective in the story- but we get a very deep look at our protagonist’s process. There is some very heavy, awkward, exposition throw in there (see page 25- no one asked for your backstory Aiden) but it’s a 1st issue so some concessions had to be made. There’s a great twist at the very end and you’ll want to go read issue #2 as soon as you hit the end of issue #1.

Overall- it’s a damn fine entry. It’s got legitimate suspense and horror as well as a familiar aesthetic that’s been done before but now applied to the “forensic procedural” genre quite so well. It’s got a fun twist, interesting characters, and solid art. Seriously give this one a look.

Novelty: 6/10 [It’s a solid entry in the neo-noir cyberpunk genre]