GalaXafreaks Park Vibes is a psychedelic cruise with good feeling and satisfying ride. The weak hooks make the ride a little bumpy, but not any less fun. There’s definitely room for more of this guy.

The art is absolutely fantastic and downright psychedelic. It’s a high-intensity palette with plenty of hot colors and high contrast moments. Each panel is so full of energy, even the dialogue follows suit. Most of the characters speak with bubbles that pop out like stickers on a poster, but many of them have their own artistic choices. This art works well in the comic just as well as it would on a poster. There isn’t a spot in the comic that breaks the artistic mold. From start to finish, it sticks to its premise.

The writing is as psychedelic as the art with heavy influences from the hippie age. It’s not always the easiest to read, but it fits the style and carries the story forward. If nothing more, it really lets one in on the characters’ personalities. The writing takes a few wide turns. Bouncing from one end of the spectrum to the another, but buckles down and brings all together after introductions are met.

One character has an exclamation point as a part of his name, and even the overall style of the comic doesn’t really make up for how awkward it feels at times. It took a couple read-overs to recognize it wasn’t the end of a sentence. Introductions are met quick, characters are named up front and their personalities are ever-present. Mystery doesn’t move this story, but a nice cliffhanger at the end drives a want for more.

Great art, good writing, and a handful of simple characters drive the story. It can feel a bit hard to keep up with when the comic is bouncing between worlds, but that doesn’t detract from the comic in any monumental way. Without digging too deep, it’s easy to brisk through the panels. This one’s worth reading for something quick and beautiful that leaves a nice desire for more. The amount of direction in the art as a whole brings the entire piece together.

I want posters of this one; make more! 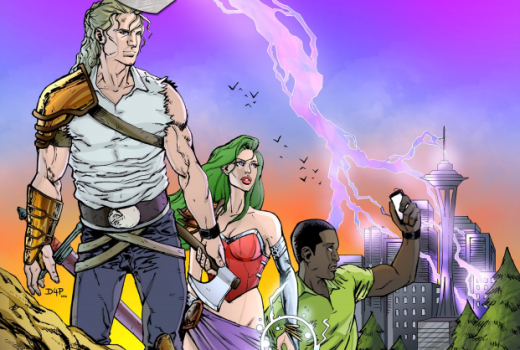 Cleave is an unexpected twist to a predictable story. That feeling that happens when calling out to a friend in the distance who turns out to be a stranger, but then just turns

out to be another cool friend.

Fletch found a solid ally. The art in Cleave sticks with the pace of the comic. The color palette is a bit drab, but chosen well. The palette itself expands and shrinks as does the ebb and flow of the comic. Reading through, an Easter egg will poke out. Then another. One thing leads to another before realizing the whole comic has these details and quips that bring it together. It’s worth looking back to appreciate and find ’em all.

Almost everything makes sense, but then a few things don’t. Like, how come these two characters were affected, but not this one? The color palette brightens up at the end, but doesn’t make a lot of sense why; and who’s the guy with the glasses and tie?

This comic is super fun. Everything connects back to itself. While not immediately evident, it feels good to look back through the pages and find those connections. Little details start poking out that weren’t there before, and the whole thing comes to a cohesive existence. There’s a bit of a cliffhanger at the end, but it’s just kind of there. Sure, there’s a want to know who the guy is, but not because he’s interesting. Rather, he just kind of popped up out of nowhere. Looking back through the pages, there’s just nothing relating back to him, and it’s troublesome. More details will probably show up in the second issue. Sooner than later when supporting Fletch through his Patreon.

I love this comic,
but who’s the guy with the glasses and tie?