Alright gang, so every critic out there seems to be doing “Best of 2013” and “Worst of 2013” lists so I figured I’d toss my hat in the ring. I’ve only been doing this for about 4 or 5 months and I am not restricting my candidates by year they were produced, more year I reviewed them. Also, for those folks who are keeping track at home, please disregard my metrics and the like- I am going for what I enjoyed and turned my stomach the most at. The lists will be top 5s.

This comic’s disconnect between audience and tone is staggering.

Clearly written by someone who doesn’t understand his source material. Ultimately it was harmless though.

The face of the sex doll with photo-realistic skin and a pink wig will remain in my nightmares for years to come and lets not talk about the half-naked cyclops or that hellish TV announcer. The reason it’s not lower on this list is because despite its faults it had some half way decent attempts at humor even if they fell flat. At least there was some passion behind it.

You’ll notice a lot of these comics I grade down have poser art. I don’t think it can’t be used to make a good comic but I do think 90% of the comic I read that use it are downright terrible. I don’t know if it is a lack of investiture with their source or that it is the lowest common denominator when it comes to art, but it is almost always terrible. Anyway Pentavis has the distinction of having the worst lettering of 2013 (with some nasty eye biting yellow text). Couple that with some straight up terrifying poser expressions and rushed aimless plot and you’ve got yourself a recipe for disaster.

Kinesis is the epitome of this poser art low/no budget production style indie comic that I see plaguing the internet. I’ll call them “armchair comics” because it almost comes across as a non-professional who REALLY LIKES comics and has some odd idea in their head that festers until they muster up the bare minimum of effort to tell us a story. I mean it is clear that the writer was really excited about making the comic and now is probably telling people that he is a “comic writer (but it’s no big deal)”. Yeah, by technical definition- he wrote a comic. But honestly, this is as much a comic as a flipbook is a movie. Sorry if I’m being so hard on this but it is really a problem with the indie industry. With the floodgates open to anyone who can put together some semblance of art and lettering able to produce a comic, it means we are going to get bad comics. However, every time we get something without a driving purpose, forethought, and a mind for what the audience will think about a comic and someone reads it- it lowers the perceived value of comics (indie or otherwise).

Kinesis gives us a juvenile plot, horrific art, a lack of understanding of the visual aspect of the medium, and so much more. It seems like someone just recorded two 4-year old boy playing together with their toys and made a comic with nightmare-fuel art.

It’s a Blue Water Productions “comic-mill” style comic that someone crapped out after reading the wikipedia page on Nancy Reagan. This is the kind of comic someone might give you as a kid as some kind of an “educational gift” that would make you cry and ask for some bad Rob Liefeld artwork instead. I get the intention that this would be some kind of “inspiration” to women, but it is so soulless and unfocused in terms of its story that I was going to list this at #2 but I couldn’t bring myself to say Kinesis was worse than it. At least someone actually wanted to make Kinesis.

Ok so there were a lot of comics who scored higher than Crunch but I couldn’t bring myself not to include this little gem on the list. It reminds me of the better parts of Venture Brothers and all the pulpy action bits were just too much fun to ignore.

Art meets comics in a way we haven’t seen very often. This is more a visual exploration of a theme and vibe more than a story and I loved it. It was nutty, different, and deserves the #4 spot.

Fates Abound really caught me out of no where. I went in with really low expectations and it had to battle uphill though some of the first chapter but once it hit its stride in the 3rd act of the first issue I was hooked. It had such a wonderfully bizarre and twisted premise that I couldn’t help but fall in love with it. While the first act could have been handled better, it was almost required to play out the way it did for it to come to that kind of conclusion. I like an underdog so #3 is where you find this one.

It was a really hard choice between Exit Generation and Fates Abound for the #2 slot. While Fates Abound probably had a more solid premise and twist- Exit Generation was pint for pound a stronger all around comic. It was unbelievably well structured, had a very expressive and fitting art style, human characters, an off-kilter sense of humor that manifests itself wonderfully in the 3rd act, and painstaking effort put into the personalization of the characters via contextual clues. Just goes to show that a lot of attention to detail and planning goes a long way!

1.The Misadventures of Electrolyte and The Justice Purveyors

I hate generic superhero premises, I hate pastiches, I hate parody for parody’s sake, and despite all this I loved Electrolyte. It was made up of all the trends I hate about indie comics but… it worked. It worked and rocked out loud. Any of these top 3 comics could have been my favorite for 2013 but Electrolyte engaged us with such conviction and bravado that I couldn’t help but laugh hysterically as I read it. It goes to show that even when the ingredients SHOULD produce a terrible result in the hands of a master they can make something amazing. The art and lettering were top notch and I got to know all the characters very well. A few of the twists are predictable but they almost make fun of it. I don’t think Electrolyte will ever get a blockbuster movie made about it but I do think that you should give it a read. 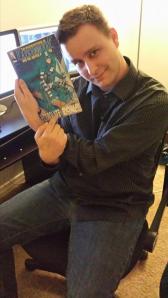 In an unrelated note, they sent me a signed copy of their comic! I am so proud of it!

This year I got to read a whole host of indie comics from stunningly bad to wonderful and I wouldn’t have skipped a single one. I laughed my way through the worst of them and reveled in the slime when it was dumped on me. I’ve been sought out by publishers, rank #2 in google for “Indie Comic Reviews” (Just behind Comics Alliance!), became a featured reviewer for DriveThruComics, and started to write for C42 as well. It’s been a good year and I can’t WAIT to see what happens for this site in 2014! My goal is to have 100 reviews by this time next year.