Holy jesus. So I started off with this one by looking at the cover. This is what stared back at me.

I don’t normally do adult stuff so I’ll spare you all the details, but I am going to review this trainwreck because… I don’t know. Maybe I’m a masochist or something.

So the first page starts with a page from this girl’s diary. Lord almighty I can’t read a word of it at normal magnification but let’s not pick on such trivial things when there are so many juicy tidbits to select. This page is written with as much grace as a three year old having a seizure. Let’s look at an excerpt,
“I hang with Finx. He’s kewl. He’s from back home too. We are buds until he farts, Then is when we war and fight over normal stuff like food, the toilet.”
Shakespeare, you have been surpassed. This is the kind of stuff I couldn’t make up if I tried.

Oh yeah, and there is a talking rat who has every “proper British” cliche, pulling words, phrases, and sayings from every era of its history. It wouldn’t be so bad except that they are misused sometimes and the protagonist is made to seem “stupider” because she doesn’t get what he is saying.

So even the spelling and grammar mistakes, which are QUITE numerous, pale in comparison to the kind of bizarre bizarre meta panhandling that occurs. Mind you this is Issue #1. In the middle of a exposition  (I can’t find a stronger word to indicate that every word of every speech bubble is exposition for like 3 pages) scene the main character starts talking about how many fans the Six Source Studios DevinatArt page has and how many fan emails they get and… wow (also I checked, the have like a dozen watchers and their FB page has like 5 likes). I don’t know if I can continue this review. It’s… wow. This is honestly the worst comic I have ever read. Ok Scotty, you can do this, soldier on. Flip to the next page…

Oh god. Why have you forsaken me? What hellish influence has driven the studio who made this comic to include an image like this? Oh lord. Anyway after that nightmarish non-sequitur scene we continue our schizophrenic plot in which Hellyssa is set up on a blind date… and is wearing a pair of joke-shop glasses and nose for some reason. (… do I have to continue to review this? *Searches contract* Fine.) she is set up on a date. But after that- time for a half naked fat cyclops because WHY NOT!

Oh and I’ll list my grievances with this comic in no particular logical order because the comic did away with logic long ago. “C”. You can use a “C” author. “Kewl” or “Krazy” is not kewl to do 15 times. It was kind of ok in the diary entry where we had an unreliable narrator… god why am I applying any iota of thought to this. Anyway, it ends with a… big surprise here… non-resolution (and not even a cliche cliffhanger?) and and ad.
Dear artist. Boobs don’t work that way. (Also, hi bender) 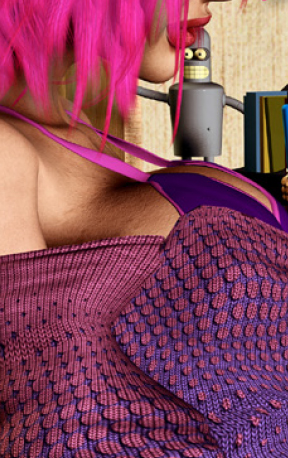 Otherwise it is surprisingly good for a 3D piece. It doesn’t suffer with the issue of lack of clutter or background characters that other comics that use this art style have. The models were surprisingly consistent (except for that news anchor whose face will haunt my nightmares).

They have this odd fascination with the main character who kind of looks like an aged hooker with breast implants and have the mistaken idea that she is some kind of sex symbol or something. The texture for her skin just looks grody and wrinkled. I don’t find her attractive, she is really just kind of terrifying, hardcore uncanny valley stuff going on. I mean if you look at the last page you can see how freakishly large her hands are? Maybe someone thinks she is attractive but to me she looks like they stretched hyper realistic skin over a blow up sex doll and put a pink wig on it.

Also, what is with the adult rating? Other than the half naked cyclops and her comically large boobs- why did this get an adult rating? Like I can see that maybe this could be seen in some super conservative country as “adult” but I totally expected this to be some raunchy sex fantasy. I’m really glad it didn’t though. I did NOT want to see granny sex doll bumping uglies with a half naked cyclops.