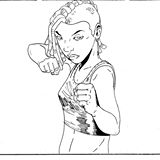 So today I’m gonna look at Little Black Girl. Full disclosure- I’ve worked with the artist Pedro Mendes on one of my own comics (Good Samaritans Issue #2) and I heard about the comic through him. I have an advanced copy so the link at the bottom of this review will be to their Facebook page. My copy also has a missing cover, so I won’t be talking about that. The comic warns it is for mature readers so- yeah, keep that in mind. Anyway, let’s take a look at Little Black Girl by ComicHaus!

So, as I’ve mentioned before- I’m a little biased on the artwork. I hired Pedro so take what I say with a grain of salt. He has a very noir, crosshatch heavy style, with an emphasis on shadows. Sometimes his proportions slip a bit but he makes up for it with his use of angles. He always adds nice little elements to the background and does excellent work overall. Give him a few years more practice and he’ll be professional grade, particularly if he works on his perspective a bit more. His shadow-heavy style matches the comic’s tone excellently and he has a mastery of dynamic motion that I envy. While not Marvel or DC level- it is an asset to the comic rather than a detriment.

I will only touch briefly on the lettering. It’s solid and that’s how it needs to be. Nothing stands out as amazingly unique but it’s legible and, for comics, that is high praise. Those people who try to reinvent the wheel with lettering fail 9/10 times. While comics are both a visual and literary medium, lettering needs to allow the words to be unobtrusive while still conveying the necessary message. This comic does just that. Kudos.

The story is a bit shocking. It is definitely for a mature audience. Without spoiling anything it’s about a businessman by day who comes home to a house full of slaves he abuses. He is, unapologetically, a monster. Unfortunately, you can see him as human but… damn. He is a piece of trash. There are a lot of subjects in here that the average reader will not be comfortable with (child abuse, implied rape, slavery, use of some very triggering words) and I’m not normally one to endorse the use of these themes… but in this case it is acceptable as it goes towards making the antagonist more monstrous. If any of the stuff I mentioned triggers you- don’t read this comic. Stay the heck away. However, it DOES set a rather profoundly disturbing psychological stage. I got the personalities of a lot of the characters (the slaves mostly) and, for a first issue, that’s really what I want. A good setup, good characterization, an establishment of motives, etc.

In summary- this is DEFINITELY a mature comic. But, unlike some others I have reviewed, it uses the mature rating to DO something- to tell a very raw and gritty story in a way I wouldn’t have otherwise enjoyed. The main antagonist is the lowest slime on the planet- a junk yard dog so deranged he NEEDS to be put down. I just wish I reviewed the entire series so I could see him get what he is owed. However, as mentioned before, this comic has LOTS of triggers. Rape, child abuse, slavery, racial slurs galore, torture, violence towards women, etc. If these things do bother you- avoid this comic. However, I am going to recommend it for the writing and art. It goes to a dark place but does so for a reason. Give it a read when it comes out in July!