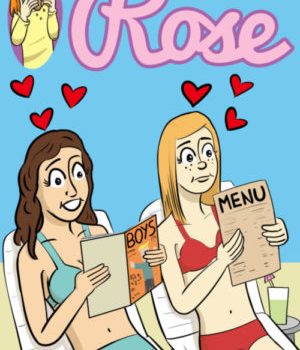 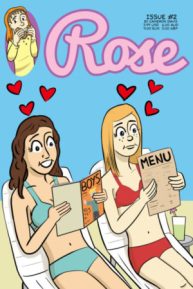 What did I just read? A hot mess, that’s what. A hot mess made by a tweeked out jumpy puppy. I had such high hopes for you jumpy puppy.

‘ello lovelies of the interwebs, today we are taking a look at ‘Rose’created by Cameron Davis. Its almost a solid 30 pages so lets not waste too much time chitchatting and just jump right into the next Indie Comic Review.

I just can’t even. I mean, wow. Lets put the mangled mess of the story structure to the side for a moment. This comic is a collection of short ones created for the web, which is perfectly acceptable. Some of my favorite comics have in fact grown into their own as webcomics first. However in this issue submitted to us they are all smashed together with only the first one having any real attempt at letting you know that its ended. Good thing too as the next story starts immediately after it, and that one is alright as well, but then everything takes a turn for the worst. 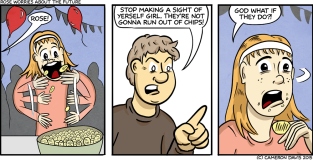 issue devolve into. The first story I actually liked. It gave us a sense of the main character, gave us a peek into some of her relationships and who they are, and gave us a fun relate-able story that might have even happened to us as a kid. Second story was a little bit more strange but again it was funny and showed us the silliness of the main character and I can live with those kinds of stories as they serve a purpose. All great, major points were about to be laid down. And then it happened…the de-evolution of sensible mini story arcs into maddening unneeded humor devoid attempts at pandering to a juvenile audience (which frankly is kind of insulting as a reader).

I get that the main character is suppose to be a kid (though what age the creator can’t even seem to agree with themself) and I get that she is suppose to be in love with food. You had so much to work with to make a funny series with a wacky food loving main character. Instead you distilled her down to the bare minimum of what could be considered a realized character and made her a cheap cardboard cut out for the lolz. But you even managed to mess up the lolz!

I actually don’t have alot of gripe about the art. Its a very Sunday morning comic strip feel to it, which is fine because (in theory anyways) it goes with the kind of story you want for a quick webcomic. I’ve actually seen alot of comics in this style that utilize its strengths to help further their antics and make a really great comic out of it. Personally I really like comics in this style because they tend to be the light hearted silly antic driven ones that you need after a tough work week. If the writing had been there, if the plot and characters had at all provided a base for the art to go off of, I think this would have been a really enjoyable read. 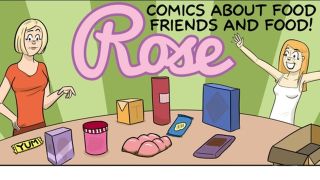 Very much the standard comic font for the lettering but it does seem to be appropriately broken up. Not alot of complaint here either accept for my normal pleads to see something different (and function) that enhances the reader’s immersion into the universe. So as far as art and lettering go this comic finally gains some points.

If this had been what it should have been, a humorous tale of a young girl in love with food who love herself, it would have been awesome. You don’t see alot of comics that portray a young girls relationship with food in one that isn’t over obsession (looking at your Rose) or an unhealthy one. It had such potentially to be a fun meaningful comic we don’t often get. Well we definitely didn’t get it here either.

I had really wanted to like this comic but it just kept hitting me over the head till I gave into not liking it. I can’t emphasis enough how insulting it is for a male to write a female main character and not even take the time to at least make her a person and not a whiny gluttony driven poor attempt at humor. Art I can forgive because it fit in with the feel of the series, its an issue made from a webcomic. Standard bland lettering is kind of the majority of what I see for these reviews, that’s fine. But the writing destroyed any chance this series had. Didn’t even give it a chance just shot it right in the face before it even left the starting line.