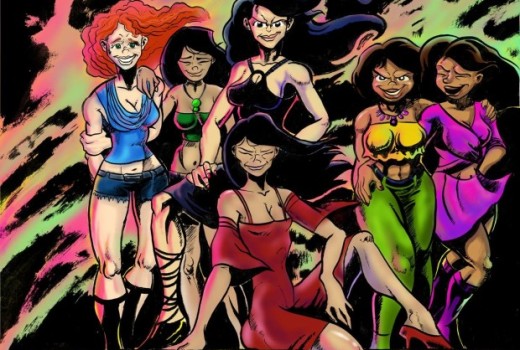 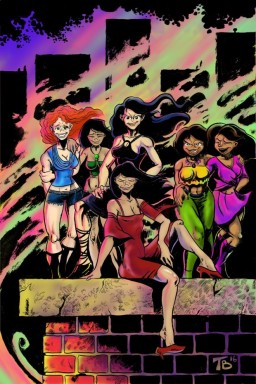 Women fighting back with little context to start and seemingly lots of sex.

Now that I’ve gotten my new review column established and going weekly you’ll also be seeing me take a swing at some of the submissions we get through our website. For that you’ll notice that the majority of how I judge a comic is the same, and I’ll still point out diversity (both where it falls flat and where it succeeds). But instead of being graded on it separately it will be rolled into writing and replaced by novelty. Something that all of the reviewers here at ICR look for when going through submissions. Without further ado lets take a look at ‘Ladies of Market Street’, written by Emily Whitaker and art by Trey Baldwin.

While its a stereotype that all women in sex work were forced into it, and this does follow that a bit, you can also see them choosing to do it themselves in a far safer environment. I’m not saying there aren’t people who are forced into it the line of work but within the bounds of this comic series it reads a little too heavy on that narrative. But given that since this line of work is illegal in the US, which can lead to some seriously shady characters in it, I’ll give it a pass as it uses it as a staple column in the story. However I will point out that the story itself in this issue is a bit muddled. We seem to start at the end and then jump back in time without context, or without a clear division between past and present. In fact I didn’t even realize it was the past I was reading until we get to the point where it almost loops back around. 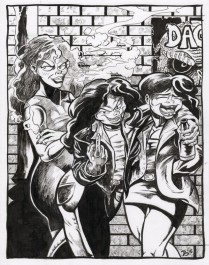 You aren’t really told anything about the characters accept that one of them has this intense need to protect another that spurs her to go to all these crazy lengths. This lack of definition for the characters leaves them to come off a bit like cut out stereotypes in this issue. Hopefully the creators fill them in more as the series continues, as they are now they don’t really hold any interest for the reader. In fact in the story they are used as little more the sexual objects. Something I’d really hoped this series wouldn’t do. And I’d like to point out before you all get up in a flame war over that statement that there is a difference between sexual objectification and expressing your sexual nature. But this review is neither the time or the place for that discussion.

The art styles exaggerated features and cartoonish vibe let the creators bring some levity on what could otherwise quickly become a rather gritty topic.  I mean the bad guy shown in the first few frames looks like Popeye for gods sake. Though a more twisted version of him but I could fall down that rabbit hole of what happened to Popeye to bring him to this dark place, so lets continue. The choice to leave the inside strictly in black and white was a bad idea though. It dropped the detail and distinctions of the characters that we saw in the colored cover and served to make the story all the more confusing. In actuality while leaving in black and white might have saved them production costs it was another hole in the storytelling that hurt the readers experience, and may in turn hurt their readership and any future sales.

Even here the standard comic font strikes again. Though they make the attempt to 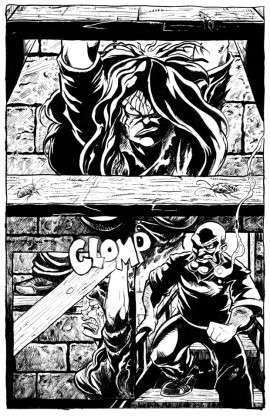 distinguish the narration for the dialog through the text bubbles if you aren’t super familiar with comics it would be lost on you. In some areas the bubbles are really small breaking up information into a ton of chunks where its not needed, in others they dump a massive amount of text into one bubble that blocks up large portions of their art. A little bit more planning ahead of time would easily remedy this for any future issues.

So I can honestly say I haven’t seen a comic like this before. Its a clear story built around the idea of sex workers taking their power back. Though the story is a bit muddled, as I discussed in the writing section, you kind of catch up to what is going on about midway-ish through the issue. The juxtaposition between the content of the comic and its art style creates this unique playground for the creators to work in to tell the story without it becoming overly gritty or grotesque.

The art style balances out the writing and the topic to help create a more enjoyable read. However the writing is a little lackluster and leave the reader having to pause and reread to make sure they know what is going on. Though even then it leaves you questioning just what the heck is going on. Standard font and weird chunks of dialogue leading to a readable but sub-par lettering throughout the book. I’d still recommend it for a read but unless we see improvements down the road I wouldn’t put it on your comic pull list.