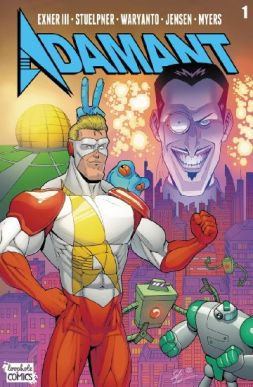 A beautiful, hilarious, superhero comic that does it all right.

The next course on our indie comic buffet is “Adamant”, a comic from Loophole Comics. The author described it to me as his love letter to the superhero comics he grew up with as a kid. Cover caught my eye- real bizarre and had some interesting color choice so I’m going to give it a read.

First things first the art top notch art- seriously best in the business. Something that didn’t sit super well with me off the bat was that there was an artist listed for page 1-7 and an entirely separate one listed for 8-20. I wasn’t really sure what to make of that but seems hinky at first. After reading it however- it’s apparent why they did this and it’s actually pretty clever. I only bring this up because it means I have to review the art twice.

The first 7 pages or so are they very stylized, thick-stroked, cartoonish, style that bring to mind some Disney stuff. Post page 8 we have a more 80s influenced comic style that keeps a similar color pallet. Both are just beautiful. This is straight up some of the best artwork I’ve come across as of late and that’ saying something. Very polished and a very good use of color across the entire thing. I wish the big publisher would put this much love into their products.

Other than that, the lettering is a little weird- the dialogue balloons are fine but some of the font choices for the narration/information boxes are a little weird. The robot dialogue font is a little hard to read at times. Overall it was readable and did it’s job.

So- this review contains a minor spoiler (it’s kind of the premise) so you’ve been warned. A few pages in the main character, a superhero named Adamant, gets thrown through time into the future (hence the artist switch). It goes from a very super-cheesy, stock, campy, superhero story (complete with a monocled evil genius villain) to a comedy set in the future. It’s kind of great and I absolutely love it. The campy hero is faced with lingo and situations commonplace in the future but it’s world he’s comically lost in. I laughed more than once reading it and I think Pogo is bloody hilarious (he’s a frog man who has all sorts of froggy lingo- kind of genius). The plot is accented nicely with some great line delivery, courtesy of a skilled writer.

Overall… I liked it. It’s a great little comic, introduced a lot of the good stuff and has some great art. It’s a fun revitalization of a golden age character and EXACTLY the sort of thing the public domain was intended for. The comic can be a little slow at time and I’m still not sold on the main character’s boy scout personality (to the point even superman would call him too altruistic and clean) but it’s damn well worth a read!