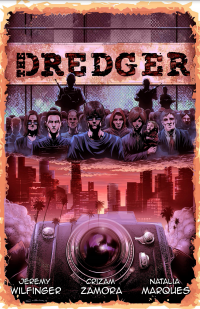 The Dredger is a well-written, well-illustrated, clearly-loved, comic that fails to excite with its premise.

Hey guys, ready for the next round of reviews? We’ve got two new writers (Kayla and Thomas) coming on board soon at Indie Comic Review (in addition to yours truly) so get excited for that! Anyway today we’ve got “The Dredger” so let’s jump on in!

Art looks downright professional grade, but not on like the “high art” end of the spectrum. Looks like a typical comics circa 2000-2010 in terms of style. A brighter palette and while things are not perfect- they are a cut above the rest. There are some really nice little bits of details that bring the world to life. This is particularly true when you see some of Ben’s photographs near the end and it’s a really solid use of the visual medium of comics.

Lettering, the hallmark of a professional comic, is on point. I could see a handful of instances where the text was probably too close to the edge of the balloons but only a critic would notice such things (see the lower right panel of page 25 for an example).

Linguistically I don’t know if heavy accents were the right choice. On the one hand they do add to the notion of diverse people thrown together into a common situation but, on the other hand, it makes it a little hard to read sometimes. There were a few well delivered lines that made me chuckle, which is a sign that the writer knows what they were doing.

In terms of plot it’s an authoritarian future where a weaponized virus has been released into a major population center. I gotta say- I get where they are going with a comic like this but… it’s honestly kind of boring. Like I kept finding myself waiting for the “big reveal” and it never came. It was kind of a let down. We have some really big build up and decent writing for what amounts to a “the government is kinda evil” story. I was getting a bit of a 28 days later vibe from it towards the middle but the premise just didn’t grab me. Maybe it picks up and evolves into something more interesting later but right now? I don’t think I’d read issue two to find out what it was.

Ultimately this is a well-written, well-illustrated, clearly-loved, comic that was written as a message (see the Frederick Douglass quote up front if you somehow missed it). However, it fails to excite. It is one of those slow build comics that never really builds to anything groundbreaking. Now, never every comic needs to be high-octane action packed into every panel (I’ve liked some slow) but this one just kind of never gets anywhere. Sure things happens and the story progresses but I didn’t feel engaged by the premise. Like I said- it’s got all the right ingredients other than the premises’ engagement to me personally- so give it a read. Maybe it’ll have a profound impact on you.